Morocco’s imperial cities are rich in history, ancient monuments and the heritage of its glorious past dynasties. Set out on a 7 day tour and acquaint yourself with all their charms and mysteries.

The stages of this itinerary will introduce you to 3 of the most beautiful cities in Morocco. As soon as you arrive in Casablanca, whose charm and history await you.

Your next stop is Marrakesh, set out straightaway to explore the “Red City”. You will visit its architectural treasures. A stop in the famous medina will expose you to the local customs and handiwork.

Finally, you will experience Rabat, the hospitable capital on the ocean. Stroll down wide, open boulevards lined with palm trees and admire the Mohamed V Mausoleum and Hassan Tower, which is almost a thousand years old.

Go on an expedition and spend a journey admiring Morocco. As you experience its authenticity and tradition, you will appreciate its rich, varied history and the many surprises it holds for you.

Arriving in Casablanca international airport, welcome by our tour guide and Terratour agent

03h00 pm: Departure with your guide for a visit of the city. Casablanca is the economic capital of Morocco.

You will start by a visit to the Central Market. The  Habous is a part of the city that was built in the 1930s by the French.  So it is no surprise that it features a unique and harmonious mix of French Art Deco and Moroccan inspired architecture…

The Royal Palace is a masterpiece of Islamic architecture, built in the middle of picturesque orange groves and elaborate water features, perfectly befitting a king. Located in the Habous district of the city’s new medina, it is the King of Morocco’s main residence in Casablanca. Every year, a number of important events, receptions and royal activities take place in the palace.

The exterior of the Hassan II Grand Mosque.  This uniquely flamboyant building was erected at enormous expense to commemorate the former king of Morocco’s 60th birthday. Set on an outcrop jutting over the Atlantic Ocean with a 210 meter high minaret, it has become the city’s inescapable landmark.  With its endless array of hand-carved stones and wood, intricate marble flooring and inlay, gilded cedar ceilings and exquisite mosaics of zellij, it is the magnificent showcase of the very best artisanship that Morocco can produce. 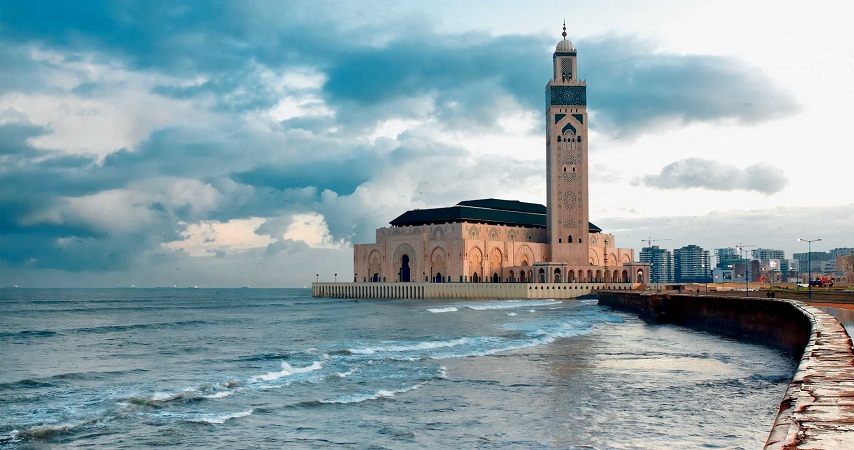 08h30 pm: Departure for dinner in the French restaurant “Cabestan”

02h30 pm: departure for Marrakech with a rest stop during the trip for free time for lunch

08h30 pm: departure for dinner and a Fantasia show in the restaurant “Chez Ali”

Overnight at your hotel

10h30 am: departure to visit the city of Marrakech, also named the ochre city,

Visit of the Koutoubia Mosque was one of the most important and the largest in the Islamic world when it was built in 1158. 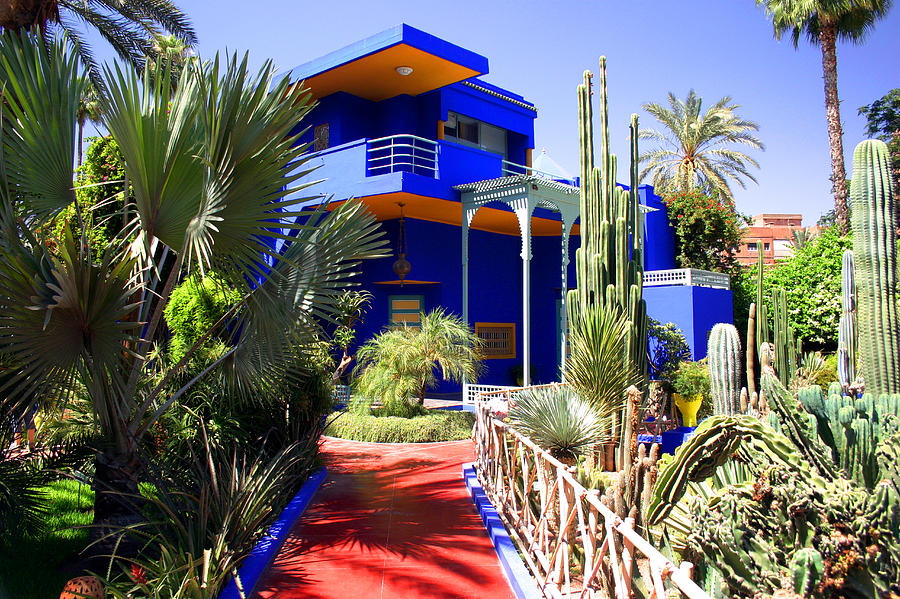 The Saadien tombs date from the end of the 16th century. The gardens are accessible through a narrow corridor, at the end of which you will find a beautiful garden with over 100 tombs, all adorned with beautiful mosaics. It is the site where servants and warriors from the Saadien dynasty are buried.

The Bahia Palace is one of the most important architectural works of Marrakech. It was built in the late nineteenth century and was designed to be the most impressive palace of all times.

Visit El Badi Palace is a ruined palace . It was commissioned by the sultan Ahmad al-Mansur of the Saadian dynasty sometime shortly after his accession in 1578. The palace’s construction was funded by a substantial ransom paid by the Portuguese after the Battle of the Three Kings. It is currently a popular tourist attraction.

The garden of Menara is an extensive garden planted with olive trees, built during the Almohade dynasty. In the center of the garden a basin was built adjacent to a pavilion. It was designed as a reservoir to irrigate nearby agricultural lands and olive and orange groves.

Lunch: in the restaurant “El Fassia”

The afternoon is dedicated to the visit of the ancient medina and the Jmaa El Fna square which is a bustling hub in the heart of Marrakech.  There to your delight, you will see live snake charmers, monkey trainers, storytellers, musicians and numerous forms of arts, such as games, henna tattooing, etc… In 2001, “the cultural space of Jmaa El Fna” was designated by UNESCO as an intangible cultural heritage of humanity, a meeting point for people of the desert and mountains.

08h30 pm: departure to the restaurant “Lotus” for dinner

Breakfast at the hotel

Free day to allow you to explore and discover the hidden gems of Marrakech at your own pace.

Breakfast in the hotel, then free morning for shopping or sight-seeing in Marrakech

2h30 pm: Free time for lunch stop in a rest area on your way to Rabat

Full day city tour in Rabat, your guide will take you for a discovery of the Capital city of Morocco

First to Chellah, where the Romans settled after their conquest of North Africa. It is a necropolis and a complex which comprises ancient roman as well as medieval ruins overlooking the BouRegreg River at the outskirts of Rabat. It is the most ancient human settlement near the mouth of the BouRegreg River. It was abandoned in 1154 and laid deserted until the 14th century, when a Merenid Sultan built a necropolis on top on the Roman site and built a defensive wall all around it to fend off at tackers. The walls are still standing today.

Mohamed Y Mausoleum is a more recent historical building.  It houses the tomb of King of Morocco, Mohamed V and his two sons, King Hassan II and Prince Moulay Abdallah.  The building is viewed as a masterpiece of modern Alaouite dynasty’s architecture.

Kasbah des Oudayas. Located at the mouth of the BouRegreg River. It was built in the twelfth century by the Almohads. Originally, this Kasbah was intended for military defense of the settlement. Later on, the Kasbah gave its name to the whole city, within the walls. Kasbah des Oudayas is a city within the city with winding, narrow streets and houses nestled inside the protective rampart.  It is part of the larger city of Rabat. In 2012, it has been designated by UNICESCO as part of the world’s heritage, along with other sites in the city. 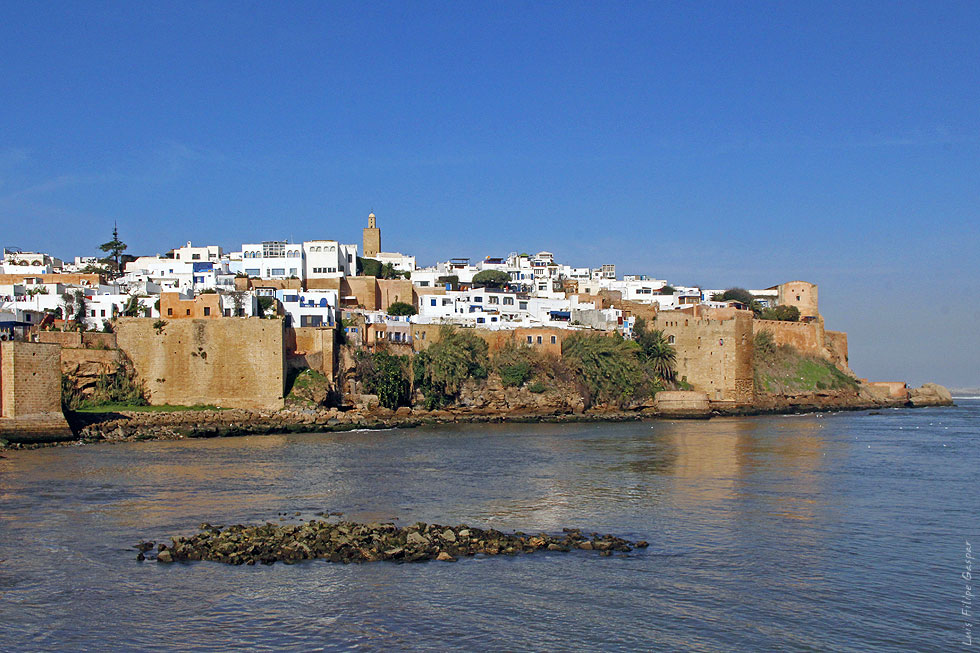 The Rue des Consuls, the street where ambassadors and other representatives of foreign governments were obliged to live until 1912.

Then visit of the ancient medina, surrounded by more ramparts, accessible through huge handcrafted gates. Countless handmade crafts shops can be found and more unique souvenirs can be found.

Lunch: in the restaurant Al Marsa in the Marina of Sale

After lunch, visit of Sale, the twin city of Rabat, separated by the Bou Regreg River

Breakfast, then free morning to visit the city of Rabat, at your leisure

Transfer to Mohammed V Casablanca International Airport for your flight